Big girl job, money, and fabulous material possessions are all well and good. These things definitely define success for the majority of us; I by no means exclude myself from this sweeping generalization (though like most of us, I would like to pretend). We are creatures that seem to be defined and shaped by our environment. Immerse kids into different scenes for a long enough period of time and they will eventually (to a certain extent) adapt interests/ taste common to that particular group. That being said throw a girl (maybe even a guy but that's not for me to speculate upon) downtown Toronto, I'm thinking Bay & Bloor, maybe factor in some spending money and over time she might become more interested in designer labels because the vast majority of people in that area are dressed to impress- and look like they have money? Think the characters from gossip girls but fast forward 5 years (I do realize they are overly dressed up in this photo, but use your imagination. Even if you do not or have not seen it- you probably have an opinion on it. Work with that.)

Now step back from the designer-grown-up-suit-and-tie world and throw that girl on a beach. The term 'beach bum,' may immediate conjure up some very alluring mental imagery. For me it also hints at a kick ass form of escapism. I'm talking laid back, flip-flops, board shorts, bathing suit, chilled out source of income, surf board, late night beverages, maybe a long board, full starry sky, maybe the cliche dude who plays the guitar around the camp fire, oh and some Sailor Jerry's? Voila. I think maybe this growing up business could be put on hold by some completely irrational decision making, going against everything you might have been taught thus far in life. I'm in. No sense of urgency and clock-checking, no cell phone/Facebook (I feel like some people might have just gasped). Its an excuse to play hooky, run away from whatever you feel like. Maybe take some time to catch your breath and realize the world does not end in your 20s. 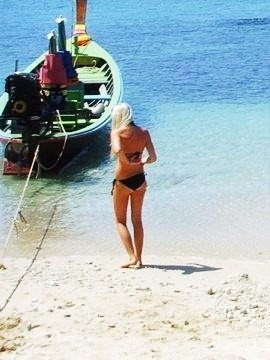 I feel as though I failed to incorporate a word that falls right into that whole beach life. Might as well use it now. stay mellow, m.