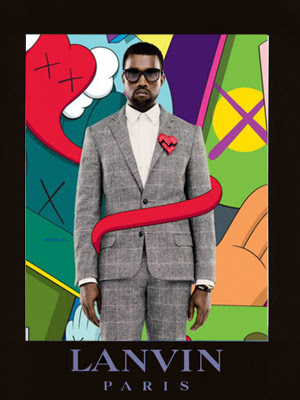 Decked out head to toe in Lavin, Kanye West made a less-then-subtle plea for refuge to Lavin's Alber Elbaz... letting his diva loose once agian (re: Swift).  Kanye eligibly snuck in the back door of the Accessories Council ACE Awards and demanded to be taken to "Alber".

After a long chat with his captive, Kanye announced to the crowd that he was heartbroken over his split with L-Vizzle. ('You're finished. The shoe's finished.'... ouch.) There is speculation that Kanye is hunting for a new fashion partner... I am pretty Lavin is currently swamped with the whole H &M line that everyone is so stoked about.

"Stylemaker of the Year" or not, partnering with Kanye is nothing less then discreet... but hey any publicity is good publicity if you've got a good PR agent.

... what is this a gossip blog or something? Ooops.